The "teacher's PET" of radionuclides – patents directed to Fluorine-18

Positron emission tomography (PET) is a non-invasive imaging technique with good spatial resolution and excellent sensitivity, which makes it possible to quantify specific pharmacological and biological processes in humans and animals.1 During the decay of certain radioactive elements, the element emits a positron. A positron is the anti-particle of an electron, and when it collides with an electron a very short lived particle called a positronium is formed. The positronium then undergoes annihilation, which results in the emission of two gamma rays of equal energy travelling in opposite directions. The two gamma rays are called a coincident pair and it is these pairs that the PET cameras detect in a PET scan.2

In the PET scan, a patient is given a dose of a medication that contains a positron-emitting radioactive element. The PET cameras, which are arranged in a ring through which the patient is slowly moved, then capture the coincident pairs emitted by the radioactive element. This process produces a series of “slice” images, which when combined give a 3-D picture of the patient. Modern PET cameras are often coupled with CT scanners. This makes it possible to collect two sets of complementary data simultaneously. The result is a unique image of the anatomy and metabolism of the patient.1

Fluorine-18 (18F), a radioactive isotope of fluorine, is the most common positron-emitting radioisotope used in PET radiopharmaceuticals. The popularity of 18F is due to its advantageous physical and nuclear properties in that its relatively long half-life (109 minutes), its positron decay (97%) and the weak energy of its positron (max 635 keV, 2.3 mm penetration range in matter) are very suitable in terms of resolution and dosimetry.1 Additionally, 18F can be produced reliably on a large scale and its relatively long half-life makes it possible to have 18F labelled radiopharmaceutical drugs administered in nuclear medicine facilities located away from the location where the production of the radiopharmaceutical drugs takes place.1

The [18F]fluoride ion is in itself an excellent tracer for bone imaging. It can be used to accurately define the anatomic location and extent of bone lesions. In serial studies, it can also be used to assess changes in bone metabolism.1 However, the most commonly used 18F radiopharmaceutical is fluorodeoxyglucose (18F-FDG), which is a glucose analogue. The uptake of 18F-FDG by tissues is a marker for the tissue uptake of glucose, which is correlated with certain types of tissue metabolism. PET imaging of 18F-FDG will highlight all zones presenting a variation of the glucidic metabolism.1 This has made 18F-FDG the standard radiopharmaceutical for PET neuroimaging and diagnosing cancer. Nevertheless, despite its heavy use, 18F-FDG is not perfect, and as this overview will show, work is being done to develop new 18F radiopharmaceuticals with better tumour specificity or for other applications, e.g. pharmaco-resistant epilepsy.

A summary of the major applicants and the main subject matters for the 18F patent landscape is given in Table 1, below. 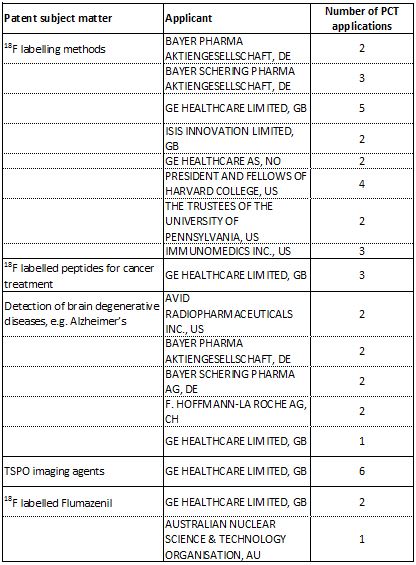 Even though 18F has been used in PET imaging since the 1990's, there is still a significant amount of work being done on improving or inventing new methods for labelling compounds with 18F. Here is a selection of new labelling methods that have been claimed during the last decade.

A common approach for synthesising a 18F labelled conjugate that can bind to a target using a vector is to react two reagents together in which one reagent contains the 18F label and the other contains the vector. Examples of such methods are given in WO 2008/083191 (GE Healthcare AS) and WO 2009/035959 (GE Healthcare Limited) where R1-vector and 18F-Linker-R2 are reacted to give conjugates with structures as shown in Figure 1 where R1 is a halogen-containing moiety and R2 is an N-alkyl-aminooxy group. Suitable vectors are various peptides, such as somatostatin analogues.

Figure 1. Examples of (a) radiopharmaceutical tracer labelled with 18F prepared with method described in WO 2008/083191 and (b) examples of linker molecules used to bind the 18F.

A slightly different approach is taken in WO 2013/092790 (GE Healthcare Limited) where a click reaction (copper-catalysed reaction of an azide with an alkyne to form a 5-membered heteroatom ring) is used to 18F label a biological targeting moiety (BTM). This gives a conjugate as shown in Figure 2 where L1 is a linker group which may be present or absent. This method has the advantages that the labelling with 18F using [18F]fluoride ion takes place after the conjugate has been formed, which minimises the synthesis steps involving radioactivity and the loss of radioactivity due to radioactivity decay during synthesis elapsed time.

Figure 2. Example of radiopharmaceutical conjugate prepared using click chemistry with (a) showing the non-labelled structure and (b) the structure once the conjugate had been labelled using [18F]fluoride ion.

A completely different method for 18F labelling of organic compounds uses high-valent palladium fluoride complexes (WO 2009/100014, WO 2009/149347, WO 2012/024604; all three owned by President and Fellows of Harvard College). The method consists of mixing an organic compound comprising one or more boron, organostannane or silane substituents, a palladium complex, and a fluorinating agent where the boron, organostannane or silane substituent is replaced with 18F. A similar method has also been developed using a nickel complex, where the nickel complex is mixed with the organic compound to be labelled and a fluorine source (WO 2014/052622, President and Fellows of Harvard College).

A useful approach for labelling peptides with 18F is to synthesise amino acids labelled with 18F. WO 2011/060887 (Bayer Schering Pharma Aktiengesellschaft) and WO 2012/150204 (Bayer Pharma Aktiengesellschaft) disclose methods for producing 18F labelled glutamic acid. Another approach for labelling peptides involves the incorporation of a BOC-protected aminooxy group (WO 2008/072976, GE Healthcare AS). The removal of the BOC-protecting group and the 18F labelling can then be carried out using microwave activation. Using microwave activation has the advantage of producing only gaseous by-products from the removal of the BOC-protecting group and of driving the chemical reaction of the 18F labelling to rapid completion. Other approaches to labelling peptides or proteins with 18F involve using a 18F labelled aldehyde where the aldehyde reacts rapidly and selectively with groups such as hydroxylamines, thiosemicarbazides and hydrazines (WO 2007/027385, Immunomedics Inc.); and forming a complex between a metal and 18F and then attach the complex to a peptide or a protein by using a chelate that will bind the metal-18F complex (WO 2009/135015, WO 2009/079024; both owned by Immunomedics Inc.).

By labelling peptides that bind to targets associated with cancer, better tumour specificity can be obtained than for the previously discussed 18F-FDG. An example of this approach is disclosed in WO 2012/022676 (GE Healthcare Limited) where a cyclic c-Met binding peptide has been labelled with 18F and used for detecting overexpression of c-Met, which can indicate a cancerous tumour or metastasis. c-Met is the receptor of Hepatocyte growth factor (HGF), which is a growth factor involved in various physiological processes. The high affinity interaction of HGF and c-Met is implicated in tumour growth, invasion and metastasis. The cyclic c-Met binding peptide can also be used for determining the c-Met status of patient’s tumours and therefore assist in the decision process before initiation of c-Met therapy in cancers, such as colorectal cancer (WO 2013/092742, GE Healthcare Limited).

Work has also been done in the area of Human Epidermal Growth Factor Receptor 2 (HER2). HER2 gene amplification and protein over-expression play pivotal roles in the pathogenesis and progression of many types of cancer. Accurate testing of HER2 status is crucial for patient stratification to identify individuals that may benefit from anti-HER2 targeted therapies such as trastuzumab or pertuzumab. WO 2014/209205 (GE Healthcare Limited) discloses a method of use of an isolated polypeptide conjugated with 18F, which binds specifically to HER2 or a variant of HER2. This method can be used to monitor the response to anti-HER2 targeted therapies.

Brain degenerative diseases, such as Alzheimer’s disease, have also been the focus of research into imaging methods using 18F in the last decade. Alzheimer’s disease is a progressive neurodegenerative disorder defined pathologically by extracellular senile plaques comprised of fibrillary deposits of the beta-amyloid peptide (Aβ) and neurofibrillary tangles comprised of paired helical filaments of hyperphosphorylated tau. Several compounds (see Figure 3 for the chemical structures) have been disclosed for detecting amyloid beta aggregates (WO 2011/141515, WO 2011/151282, WO 2011/076825, all three owned by Bayer Pharma Aktiengesellschaft; WO 2015/071856, WO 2015/071857, both owned by F. Hoffmann-La Roche AG). WO 2010/078370 and WO 2009/124273 (both owned by Avid Radiopharmaceuticals Inc.) disclose compositions and methods for using 18F labelled styrylpyridine, known as 18F-AV-45, to detect neurodegenerative states of diseases like Alzheimer’s or Parkinson’s disease. Compounds have also been developed for detecting neurofibrillary tangles comprised of paired helical filaments of hyperphosphorylated tau proteins associated with Alzheimer’s disease (WO 2012/067863, GE Healthcare Limited). 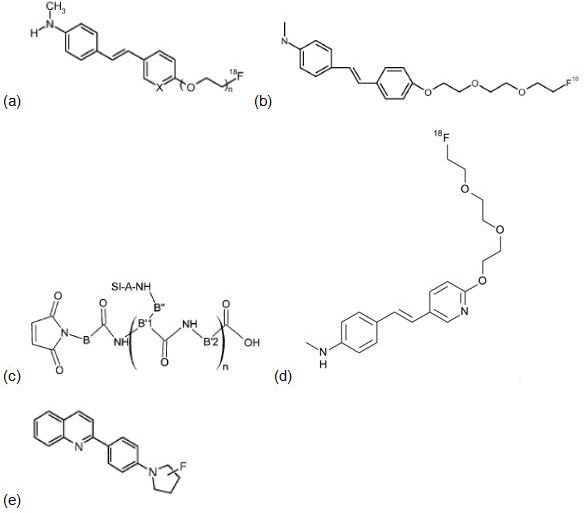 Another focus of research into imaging methods using 18F is imaging peripheral benzodiazepine receptor or translocutor protein (TSPO) as it is now known. TSPO is mainly localised in peripheral tissues and glial cells. It has been demonstrated that in disease states, such as HIV encephalitis, Alzheimer's disease, multiple sclerosis and stroke, elevated TSPO was present in parenchymal microglia, macrophages and some hypertrophic astrocytes, but the distribution of TSPO varied depending on the disease, disease stage and proximity to the lesion or relation to infection. (R)-11C-PK11195 has been widely used as a generic indicator of central nervous system inflammation. However, there are limitations with (R)-11C-PK11195 including high nonspecific binding, low brain penetration and high plasma protein binding. A range of compounds have been developed to avoid the limitations of (R)-11C-PK11195 (WO 2007/060517, WO 2007/074383, WO 2010/037851, WO 2015/040151, WO 2015/040148 and WO 2015/040087, all owned by GE Healthcare Limited). 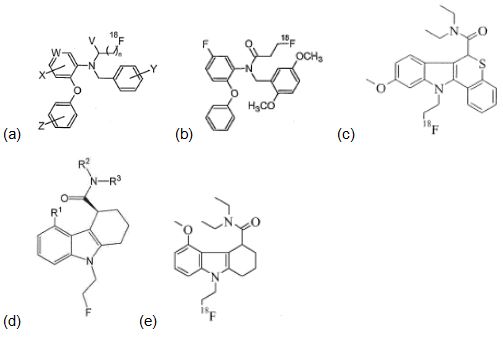 Work has also been done into developing a 18F labelled version of Flumazenil (WO 2008/022396, Australian Nuclear Science & Technology Organisation; WO 2011/042550 and WO 2012/131037 both owned by GE Healthcare Limited). 11C-Flumazenil has been used for PET imaging of patients with drug-resistant focal epilepsy, but as a result of the logistical limitations inherent in the use of 11C (its half-life is short at 20.3 minutes), a 18F labelled version is being developed.

Flumazenil (also known as flumazepil, code name Ro 15-1788, trade names Anexate, Lanexat, Mazicon, Romazicon) is a neutralising allosteric modulator of GABAA receptors in the central nervous system. Defective GABAA receptor neurotransmission may be caused by a reduction in GABAA receptors, or by defective functioning of the GABAA receptor due to e.g. a genetic mutation in a GABAA receptor gene or a traumatic brain injury, and is implicated in a number of neurological and psychiatric disorders, including epilepsy and anxiety disorders. Figure 5 shows the structure of Flumazenil and examples of the 18F labelled versions being developed. 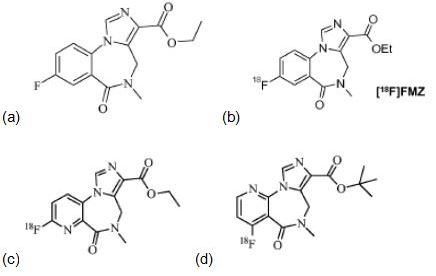 The patent landscape of 18F-based radiopharmaceuticals shows a diverse range of technologies as well as improvements or developments in established areas such as cancer diagnostics. The popular PET radioactive element is well positioned to extend its popularity even further.