An assessment of the novelty of these claims under Australian law can be difficult, particularly in the case where there is overlap between a prior art Markush disclosure and a Markush claim.

An example of a Markush claim is shown below, from Australian patent 643267 directed to Olanzapine (which was the subject of a recent infringement/revocation case ): 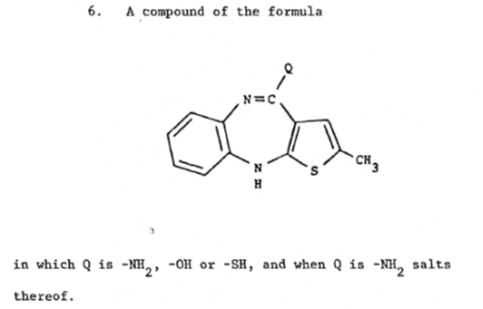 In this case there is only one Markush group – “Q” – which can be one of three substituents. In other cases, there may be numerous Markush groups which could potentially be selected from a multitude of substituents.

In the above case, Apotex argued that the patent was invalid due to lack of novelty in light of the disclosure of earlier patents by Eli Lily which contained generic disclosures of the above molecule. Ultimately, the claims were found to be novel as the prior art did not provide clear and unmistakeable directions that would lead the skilled addressee to the invention.

In assessing the novelty of a claim, the standard approach is to apply the reverse infringement test, i.e. if the disclosure of a prior art citation would fall within the scope of a claim, then that claim lacks novelty. However, this is not the only test for novelty and in cases such as the above, the Courts have applied different tests in deciding whether broad generic claims anticipate a narrower claim.

In addition to the reverse infringement test, for the disclosure of the citation to be relevant for the purpose of novelty, the disclosure must also be one that:

Given the above, there is a real question as to whether a prior art document that includes a Markush structure that overlaps with a claimed Markush structure but does not explicitly disclose a molecule that falls within the scope of that claim is an anticipation of the claim.

A Markush structure may be considered a disclosure of every individual molecule that falls within the scope of the Markush structure. In this case, when applying the reverse infringement test the subsequently claimed molecule will be found to be anticipated. However, as discussed above there are additional tests for novelty. In the context of enabling disclosures in particular, Crennan J stated that: “Not every disclosure is a disclosure for novelty purposes”1 Thus, the claim may still be considered novel if the prior art document does not provide clear and unmistakable directions and/or an enabling disclosure. An enabling disclosure is one which is sufficient to enable the skilled addressee to make the compound without the necessity of making further experiments2.

The Australian Patent Office applies varying approaches, but appears to consider that a Markush formula is a generic disclosure and that generic disclosures do not provide clear and unmistakable directions or an enabling disclosure unless that document also includes an example falling within the claimed range3. The Australian Patent Office generally does not seem to consider the overlap between a prior art Markush structure and a claimed Markush structure in assessing novelty.

Although the Australian Patent Office is willing to accept broad Markush claims (that are not prior disclosed by an exemplified compound), the more important question is whether these claims would be considered valid by the Courts. Just because there is no explicit prior art disclosure of a molecule does not mean that the disclosure does not provide clear and unmistakable directions or an enabling disclosure for a molecule that falls within the scope of the claims.

Does the Markush claim define a selection over the prior art?

Another avenue that can be pursued is to argue that the claimed Markush structure defines a selection over the prior art. Briefly, in order to define a selection:

Selection patents are an unsettled area of Australian patent law. The Australian Patent Office will generally accept claims if it can be demonstrated that those claims meet the above selection criteria. However, the Courts have not come to a definitive view regarding whether “selection patents” are a feature of Australian law. Selection patents were referred to by Gyles J as “a somewhat controversial topic”7, similarly Middleton J stated that: “Patents for selection inventions (if such patents form part of Australian law) are based on the discovery of desirable properties arising from the use of a specific material that has been broadly encompassed by a prior disclosure of a family of related materials”8 (emphasis added).

In a number of cases, which dealt with the issue of selection criteria, the general approach taken by the Courts was to first assess the novelty of the claims using the standard tests discussed above, and then to informally consider whether the claims would define a valid selection9,10,11. In each case, the informal consideration of whether the claims defined a selection reached the same conclusion as the standard approach to assessing the novelty of the claims. Therefore, the Courts have so far avoided having to make a definitive decision on whether consideration of selection criteria is a distinct test for novelty under Australian law.

What this means for Patent Applicants

Given the discussion above, there is ambiguity as to whether Markush claims are novel if they overlap with a general prior art disclosure (e.g. a prior art Markush claim). It appears that the Australian Patent Office is generally willing to accept (allow) such claims. However, it is not clear that these claims will necessarily be found valid in the Courts.

Our suggested approach for patent applications in the face of a general prior art disclosure would be as follows:

Obtain the broadest claim possible by amending the claim to exclude any molecules exemplified by the prior art, and then argue in favour of novelty on the basis of: (i) a lack of clear and unmistakable directions, (ii) a lack of an enabling disclosure, and/or (iii) that the claim defines a selection.

While your broadest claim may circumvent the explicit disclosures of the prior art, there may be a question as to whether this claim still encompasses embodiments which are enabled by the prior art disclosure (despite not being explicitly disclosed). Your dependent claims should narrow the scope of the invention to exclude these additional embodiments.

This may entail a review of the examples of the prior art document to determine what molecules could readily be made by the synthetic approaches discussed in that document. It may also involve considering which molecules or class of molecules are the most active and covering these directly.

As with a standard approach to drafting, further dependent claims should narrow the breadth of the invention ideally to cover the preferred embodiments.