What to expect when Australian patent prosecution law changes on April 15, 2013

April 15, 2013 is an important date insofar as Australian patent prosecution is concerned. On this date ‘new law’ will come into force that will apply to patent applications for which examination has not been requested by this time.

In the following weeks, we will present a series of articles aimed at clarifying the likely changes under the new law, and identifying what these changes should mean for you. In this first article, we discuss the changes relating to the timelines for examination of Australian standard patent applications.

A key objective of the new law is to simplify and to increase the efficiency of Australian patent prosecution. Two key changes are proposed to give effect to this objective, as follows:

These changes are explained further below.

Under the current law (i.e. pre April 15, 2013) applicants must request examination within 6 months of receipt of a Patent Office direction (Figure 1). If a request is not made, the application will lapse. In certain circumstances, applicants may defer examination for a period of no more than 9 months from the aforementioned 6 month due date. In all circumstances, an applicant must request examination within 5 years from the Australian application filing date (in many cases this is the same as the International (PCT) filing date). This is the ‘5 year rule’.

The 5 year rule remains under the new law (Figure 1). However, the applicant is now given 2 months only to request examination after receiving a Patent Office direction to do so. Further, under the new law it will not be possible to defer filing a request for examination. For an enlarged copy of the timeline please see: Figure 1 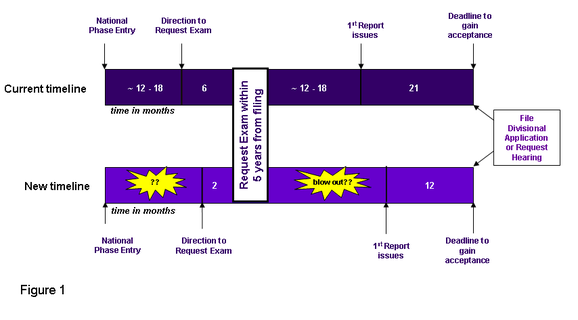 Under the current law, applicants have 21 months from the date of a 1st examination report to have their application accepted (or ‘allowed’) (Figure 1). This date is not extendible. It is also possible for an applicant to request postponement of acceptance (during the provided 21 months) if they are waiting on the outcome of prosecution in another jurisdiction.

Under the proposed changes, applicants will only have 12 months from the date of the first examination report to gain acceptance of their application (Figure 1). This date is not extendable. Moreover, it will now be at the discretion of the Office as to whether to grant a postponement of acceptance.

What you should expect

The expectation of the Patent Office appears to be that these changes will strike a balance between giving an applicant sufficient time to decide whether or not to have an application examined, and reducing delays that are not in the public interest. Apparently the abolition of an applicant’s current entitlement to an additional 4 months is of benefit to the public interest. And the shortened time for allowance is supposed to reduce the overall time to grant.

All well and good, but what is in this for the patent applicant - or a potential infringer or opponent? Will patents be granted more quickly, or will prosecution delays remain unresolved?

We think that patents will not be granted more quickly. Why? There are two reasons.

This mechanism remains under the new law. What has changed is that it is now possible for the Office to issue a direction up to 58 months from the application filing date if examination reaches capacity.

There seems to be a high likelihood of this outcome. In particular, like others in the profession, our firm is now experiencing an increased demand for voluntary requests for examination, (most likely in lieu of the tougher prosecution proceedings that will apply under the new law). We expect this demand will create a large backlog of applications for examination. We expect the capacity constraints on examination to feedback into the timing of directions to request examination, so that these directions are issued later, rather than earlier in the 5 year period.

Second, there is nothing in the new law which compels the Office to issue a 1st examination report sooner than under the current law. Yes, there is a charter of customer service, but little else.

Under the current law, an applicant can expect to wait at least 12 months between requesting examination and receiving the first examination report. Under the new law it is reasonable to expect that this period will blow out. For example:

Given all of the above, we think it unlikely, at least in the short term that patents will grant more quickly. Sure, in some circumstances the time for requesting examination is effectively brought forward by 4 months. But the point is that the new law does not compel the Office to expedite issuance of 1st examination reports or further reports once examination has been requested.

So what’s in it for the patent applicant? It is hard to find anything good here. The timelines for certain actions are shortened, requiring more urgent activity on behalf of the applicant but there doesn’t seem to be any reason to expect earlier grant of rights. In the short term it may be harder to get applications accepted within the 12 month period, and this might see more divisional application activity or hearings before the Office, both of which should contribute to cost.

Perhaps this is why many applicants are now voluntarily requesting examination before 15 April 2013 – at least to get the benefit of the 21 month period available under the current law?

We don’t see anything here for the public interest or a potential infringer or opponent. We don’t expect earlier grant, so we don’t see the alleged uncertainty caused by current pendency of applications being resolved.

The rule changes are expected to be enacted in current form on 15 April 2013. The shortened deadline for gaining acceptance will apply to applications for which examination is requested on or after this date.